Hit LIKE & SUBSCRIBE!
🔔Turn Notifications on and you will never miss a video again🔔
🔴No copyright infringement intended. Video will be removed if requested by the copyright owner.
PLEASE SUBSCRIBE TO MY CHANNEL !
ENJOY THE VIDEO ! THANKS FOR WATCHING ME !
Real Madrid 4 Atlético Madrid 1, Champions League final 2014: match report
Read a full match report of the Champions League final between Real Madrid and Atlético Madrid at the Stadium of Light, Lisbon, on Saturday, May 24, 2014
For Gareth Bale this was the most glorious end to an astonishing season for him in the white of Real Madrid following his world-record £86 million transfer.
A Champions League triumph, the fulfillment of his dreams and the man who delivered the elusive Decima - a 10th European Cup - to Real with a simple nod of his head. It ended in ugly scenes with Atlético coach Diego Simeone astonishingly storming onto the pitch.
For Atlético the undoubted gamble of starting with Diego Costa, after a week of intense and controversial treatment, involving the massaging of horse placenta, to ease his damaged hamstring did not work. The striker was withdrawn inside nine minutes and jogged straight down the tunnel having been unable to sprint and clearly in discomfort in the opening exchanges.
Real had tried to impose themselves with Luka Modric prominent as they moved the ball quickly forward only for the Atlético midfield to finally stabilise itself. They pressed and harried and the pattern of the game was set with Simeone’s side planning to strike on the counter-attack and certainly not intending to be cowed.
That early Real impetus blew itself out. They were knocked out of their stride - quite literally - with Atlético maintaining their aggressive, aggressively-borderline approach, particularly towards Cristiano Ronaldo.
They overstepped the mark when Fabio Coentrao was bundled over but Modric curled the free-kick straight into Thibaut Courtois.

The contest was descending but then, finally, it opened up for Bale who had until then been struggling to gain any involvement. A woeful pass by Tiago was intercepted by the Welshman and he ran at the heart of the Atlético goal. Defenders desperately attempted to cover but Bale feinted, the opportunity opened up - but then he sent his low shot narrowly wide. What an opportunity.
And what a price Real then paid. Raphaël Varane conceded a corner, under pressure from the excellent David Villa, and it was only half-cleared with the ball headed back into the penalty area by Juanfran.

Real were reeling - and disorganised. Another corner was needlessly conceded and this time Adrian met it only for his header to fly over.
Bale, Ronaldo and Karim Benzema were marginal presences, isolated too far up the pitch and a sense of panic began to spread within Carlo Ancelotti’s side. There was an ominous precedent also for Real - Atlético had won all six Champions League ties this season in which they had been leading at half-time.
If Atlético could maintain their intensity, their pressing and their aggression it was going to take something special for Real to work their way back. They had special players but the haunted look on Ancelotti’s face in the dugout betrayed the enormity of the task especially as Atlético seized the initiative and seized their opponents with Miranda then cautioned for pulling back Di María as he again ran at goal. There is undoubtedly a cynical edge also to Simeone’s side.
Twenty-five yards out and it represented a chance for Ronaldo but Courtois punched his deflected free-kick over. Ancelotti had seen enough and rolled the dice with two changes. He needed something to happen. And quick.

Again Real pushed. This time Ronaldo teed up Bale but once more he was wayward - steering his shot wide. Again he held his head in his hands before Bale ran at goal once more only to prod his shot agonizingly wide once more.
Atlético were pinned. Surely Marcelo would score? But Juanfran’s boot beat his head to the ball and then Courtois was stranded from a low cross. It carried on with the ball pin-balling around the Atlético area as they defended ever deeper and ever more frantically.
As the final whistle blew as extra-time was headed for Casillas held his defender’s head as he talked into his ear. There was no need to hear what his head. His expression said it all.
Atlético appeared spent; appeared to be holding on for penalties and Simeone, anxiously prowling, knew it. His anger boiled over in extra-time, confronting the referee Bjorn Kuipers, furious at the added minutes but Atlético could not hold on.
One more run, this time from Di Maria, cutting in from the left and his shot was palmed by Courtois. But there was Bale to jump and squeeze the ball into the net to find the vindication,
the glory and win the trophy. Marcelo’s late strike simply sealed it before Ronaldo stroked home a penalty after being tripped by Godin.

9:46 that's what a hunger and passion looks like, Sergio Ramos 👑, that's how bad he wanted to lift the trophy and indeed 3 glorious chapters followed ! #HalaMadrid Ramos ❤️

The equaliser killed their spirit. The game was over after that really

tears in my eyes, unforgettable game and lovely moment of my life.

I can watch this all day 😍

And after so many years from this night Real Madrid would retake the throne of Europe. Who would’ve known after Ramos goal Madrid would win 4/5 next champions league

The ball boy behind the goal on the left was so glad 5:11😅

Rewatched for many times still getting goosebump

İ never forget this match, mostly the goal of ramos. Ramos was the hero of this day. And i miss this real madrid team😥

The most entertaining match highlights

Goal from Sergio Ramos is so memorable for me. I love this game.

I really miss this Real Madrid

I remember I watched this final with my mates and when Madrid scored that last minute header we all stood up and screamed of excitement!

come back in a fixture is common, but in a final...that's why you call it an "EPIC COME BACK"

Simione was a victim of his own success...sorry what was Tiago doing in the match again.Always losing big games bra learn from your mistakes

This was onoe of the greatest finals ever. Such an amazing game

Zidane was assistant coach under Carlo Ancelotti then.

Xabi Alonso is me watching this match

Not to mention captain cassilas

Bale miss a lot chance, but also save madrid for 2nd goal for madrid

Why the fuck did ronaldo take his shirt off??! He didnt do shit

Ramos is the best defender in the world

I'll remember this day all my life 💜 Hala Madrid!

One of the best final everr

how many times Ramos saved RM, and paved the ballon dor for cr7

@Tttt Y La liga what what what?????????????????????????? Forget about all seasons just watch his 2013 season and video "CR7 was a monster in 2013" you would get your answer Trust me My Friend and Honestly "Considering all aspects including Skills, dribllings, speed, back heel passes, step overs, bicycle kicks, left foot, right foot, Best Player in England, Best player in La liga, Best Player in seria A, All Time Champions League Best Player Top Scorrer Top Assists Just required 9 years in La liga 34 Hattricks Above All Above All "All Time Portugal Legend" Soon All Time International Top Scorrers.......... . .."He is All Time Legend with Proofs"

@Hammad Akram alright, too much time spent. in MANU, early years he sucks on skill, last years was great, at his prime, but speaking of all time he is just top 20, if you would respect those real talented players in history. that's it. after he came to laliga ... he cannot even dribble ... alright. good to talk to you. be happy bro.

@Tttt YA man who was achieving everything at Man. United Champions League, Primier League, Ballon Dor etc. But wanted another challenge and to get out of his Comfort Zone and moved to Real Mad and Conquered everything 4 Ballon dor 4 Champions League 2 la liga etc. A team which managed to win Champions L after 12 years Only because of CR7 Top Scorer 17 goals All Time Record Won Euro Title with National Team Uefa Nations League Against Wolfburg, Against Juventus Twice. Still so many Reasons I couldn't recall. And Now recently was among Top 3 ballon dor Come On At Juventus Won 3 Titles in a Year Only Player in the History won Player of the Year at Three Different Top Leagues. If he wasn't Successful, You didn't even need to Comment on this video Fact Fact Fact. And I'm an adult boy, I know what are Useful Arguments.

@Hammad Akram no. u don't hurt me at all. why hurt? you feel hurt? btw, i never say cr7 is terrible players, he is great player for sure, yes that's the fact. i agree it. but you are not able to agree also the facts that he is just top 20 or 30, not 5 balon dor level. again, u don't have to agree, just it's the fact that all people play football knows.

@Tttt Y I'm sorry If I hurt you, but you are disrespecting CR7 by ignoring his achievments Man. Don't ignore the facts Plzzzzz

the most dramatic games , ramos magic and madrid have a winner mentality ,,, ,,, best game all the time for madridista and world

I miss Ronaldo in Madrid

Must of been special for Ronaldo And Pepe winning this in Lisboa. Then DiMaria used to play for Benfica. Wow. 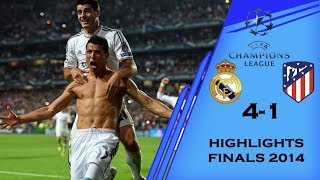 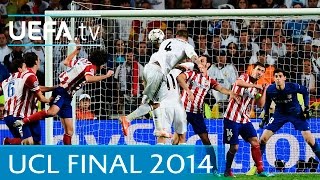 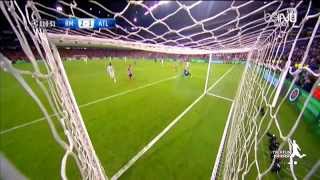 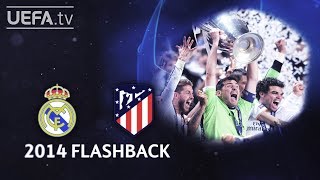 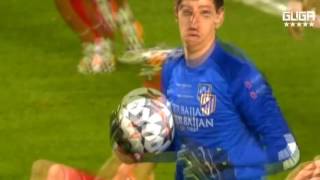 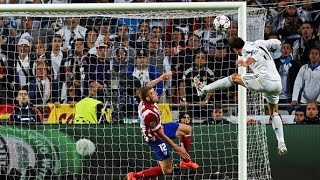 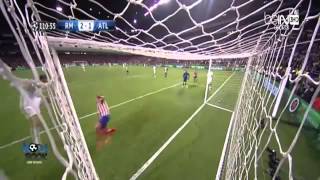 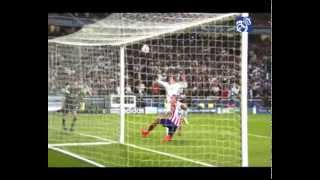 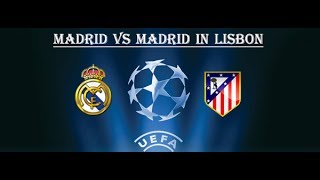 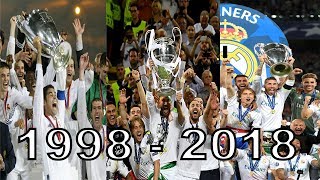 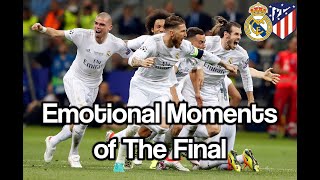 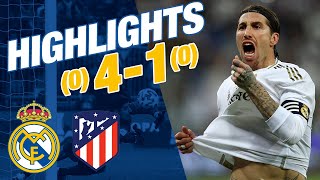